My connecting flight to Rome arrived late due to the weather and I missed my onward connection.  After an hour of administrative wrangling the airline had arranged a new flight the next day and a hotel for the night.  Unfortunately my checked bag was lost for the time being.  Still better than a night at the airport!

A woman came up to the airline desk and said there was a bus waiting outside to take me to the hotel.  I got outside.  No bus.  Just my luck, I thought.  Then she pointed to a car and said “Bus!  Bus!  I mean car!”  The car to take me to the hotel was a black 2018 BMW 7 series.  The driver whisked me away at great speed down the autostrada and I was at the hotel in double-quick time.  I must say the 7 series is very nice to sit in the back of.

The hotel was some random 3 star in some random semi-commercial area.  When I arrived the manager gave me a ‘snack’, since it was midnight by this point.  It had several biscuits, crackers, and two tins of meat and vegetables.  Some snack!

Although I didn’t have a phone charger I did have my cable, and sure enough the TV had a USB port in the back.  I was then able to get a reasonable sleep.

The next morning breakfast was laid on:

They had a token effort at savoury breakfast, but you could tell you were meant to eat all the pastries

I had a bit of time to work out and do some admin.  The manager said lunch was provided, but the hotel didn’t usually do lunch, so they would ‘whip something up’.  I came through and the table was set with a basket of bread, mineral water, and probably the best meal I had on the whole holiday.

Spinach in olive oil, peas and ham, and one of the best steaks I have ever eaten, cooked perfectly medium-rare

The airline had ordered my airport shuttle several hours before the flight so that I would have time to investigate the whereabouts of my bag.  That left me a few hours to look around.  I decided to stay within walking distance of the hotel so that I didn’t get caught out by a strike on the underground or some other random occurrence.

The area was full of modernist architecture. 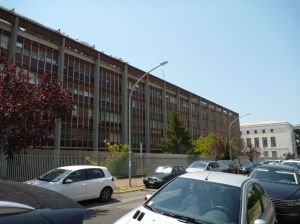 There was also a rather monumental looking building with these mosaics.

There was a central point with four of these collonaded buildings around it.  From when Italy had an *ahem* stronger government. 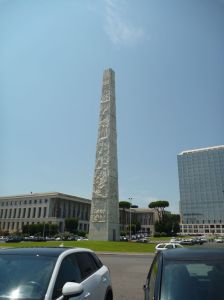 Now they have museums in them. 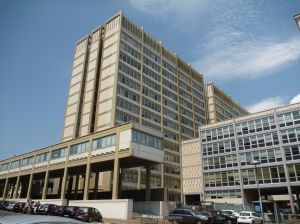 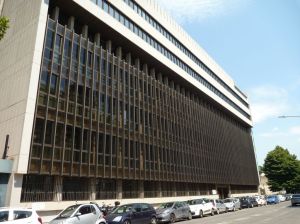 The boldness of the line!

I went in to a supermarket.  What we would consider a gourmet delicatessen is their regular supermarket.

This is just a regular supermarket and nothing fancy

I walked around window shopping.  See my other post about the fashion I saw.     I then headed back up the hill and found an abandoned but very fancy building. 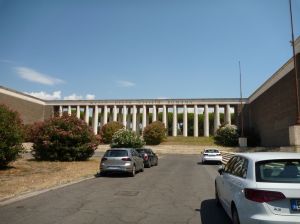 Looking back down towards the needle. In its heyday it must have been quite spectacular 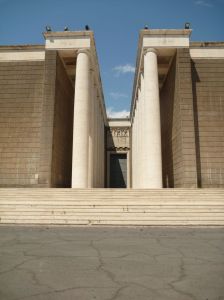 I then headed back to the hotel.

I was taken away in a disappointingly non-BMW airport shuttle van.  I then spent 90 min in the lost luggage queue.  They had one person on.  It took 15-30 min to deal with each person.  Eventually I had some service.  If you are not at your final destination you cannot put in a claim.  I waited several hours for my flight and then did just that at my final stop, with a much more helpful attendant.  It then took another 4 days for my bag to show up (with about 15 bag tags on it).