The hotel, like every one I have stayed at here, does not have air conditioning.  This meant I had to sleep with all the windows open and even then I was too hot.  If you like sleeping with a top sheet TOO BAD because they only do continental blankets here so it’s boil or nothing.

I started with a workout in a park.  Expecting the playground to have monkey bars, I instead found this: 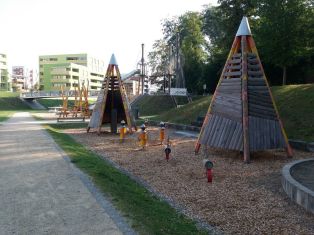 All the playgrounds in Germany appeared unique

I then set off for the Museum of Bread Culture!

Entry was 4 Euro.  Note that it’s mostly in German.

While I was there I think I worked out why there have been so many groups of random children around – it must be the few weeks before the end of their school year, so like us you have junior classes you have to keep occupied somehow.  At the museum there were at least 2 separate groups of very unvailable schoolchildren.

They had a short term exhibit about air and pollution:

It’s compressed smog particulate from a filter in China

The rest of the museum had various elements of bread culture – the development of milling (with hands on milling machines), breadmaking, bread selling and guilds in Germany and the place of bread in the Judeo-Christian tradition. 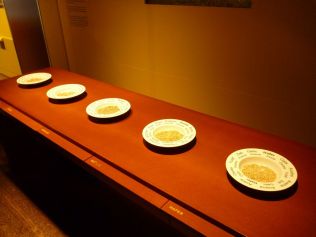 Egyptian wheat grinding. A woman could grind 2kg per day 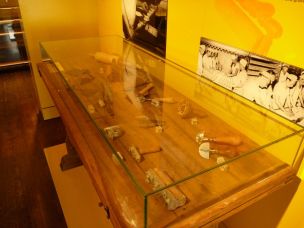 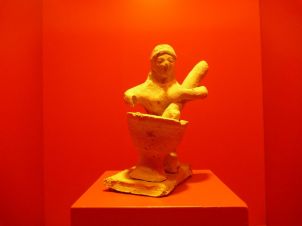 They also had quite a bit about the place of bread in art – many 17th century paintings about picturesque peasants and their bread, but also others.

In the bread selling part they had this: 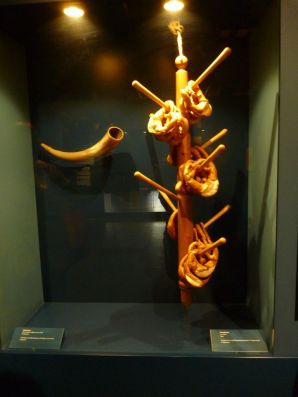 A bread horn! Bread is that important that you need to announce its presence

They also had a short bit about the place of bread in the diet.  In Germany it’s basically assumed that you get most of your calories from bread anyway, but they did a hard sell to convince you to eat more because it’s good for you.  They had a helpful food pyramid:

Note bread is the biggest, not fruit/vegetables

Then there was the bit about bread in religion.  This is Germany so there’s no forgetting that bread is the body of Christ.

They also had some info about the Ancient Egyptians and their ceremonial bread: 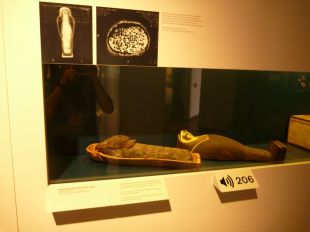 A loaf of bread was put in the sarcophagus. Note the CT scan above

The rest of the upper floor was about famines in the 19th and 20th centuries.  If my German was better I think I would have got more out of it in terms of the role of famine in socio-political developments. 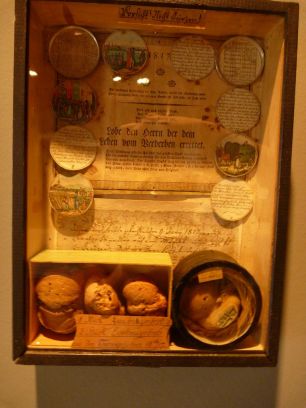 Bread ration during a famine in the early 19th century

This included the wars.  They tried to make the connection with American rationing and German hunger during WW1 but I don’t think the scale of rationing is even comparable.

US rationing posters from WW1

The section dealing with post WW1 Germany was quite interesting.  They had quite a few artworks from the period.

That rather grotesque style that was prominent in Germany after WW1.  It shows people reaching for a loaf of bread that is being hoised away by a crane. 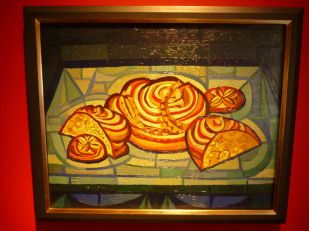 This 1930s poster is for the SPD, not the NS, although I think the attempt to mimic the style is deliberate

They also had a bit about modern hunger and pressure on natural resources.

This is included only to show who is left off the map!

The section finished with this: 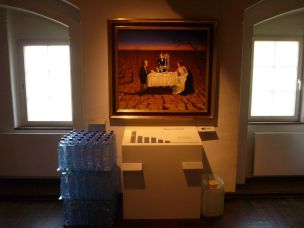 The painting is called ‘The Last Dinner’ (1990). The waiter is serving up a scorpion. How utterly depressing

Rather than be depressed I looked at the historic building the exhibition was in. 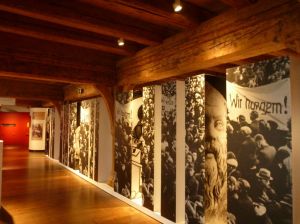 The building is 18th century 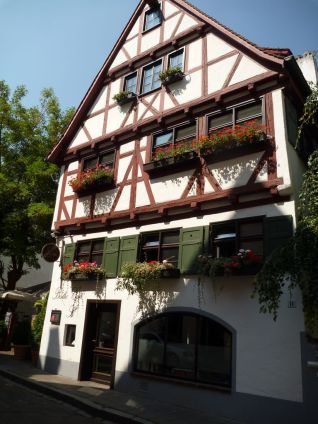 Nifty gabled building across the road

Because I haven’t had any fish and chips for ages I had some for lunch. 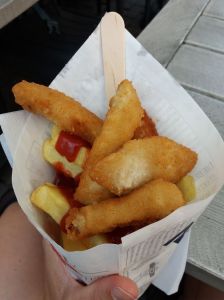 If you don’t know why that would be interesting the Hochschule fuer Gestaltungs Ulm was a very influential design school in Ulm in the 1950s and 60s.  It was shut down in 1968.  In terms of style it was the spiritual successor to the Bauhaus movement. 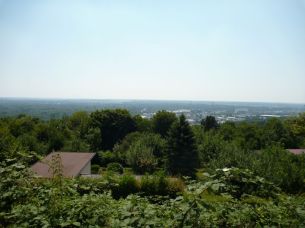 View from the walk up the hill to the site

The museum is in the old campus, which now houses several businesses. 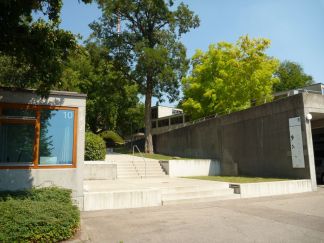 Student flats. When do you think it was designed??

At first glance you might think it was 70s but these buildings were designed in 1952.

The exhibition is small but covers a lot.  Note that it’s about half in German.

Unlike the Bauhaus HfG did use mathematical principles in their design.  The concentrated on the Gestalt.  Classes included photography, industrial design, fabrication, and information communication.  This was a new innovation above what had previously been studied as graphic design or typography. 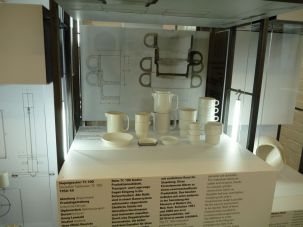 Several designs were for housing units that could be prefabricated and were modular, to allow flexible and low-cost buildings. This was an immediate concern in postwar Germany, for obvious reasons. 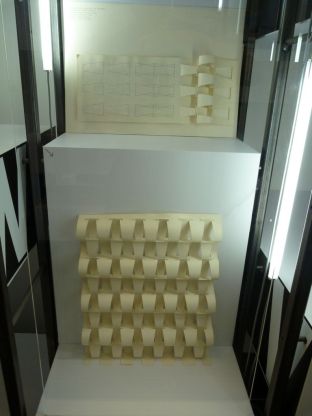 Quite an influential technique based on topography

They did Braun’s postwar design

The base for a blender

A model of a food vending system

After I finished there I walked out to the north where there was a fortification on the hill.  The whole town is ringed by a town wall built in the 1840s, and there are many remnants, but this is one of the biggest.

Looking to the north east 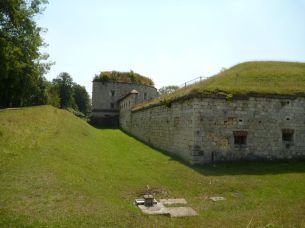 This was used as a prison by the Nazis 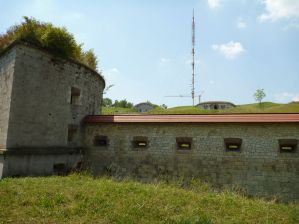 I then caught the bus back to town. 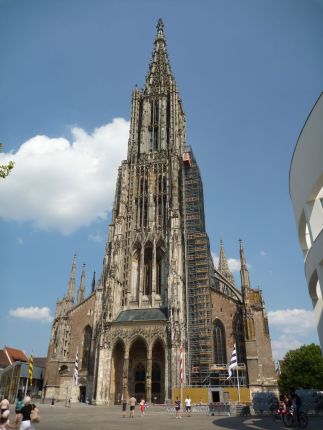 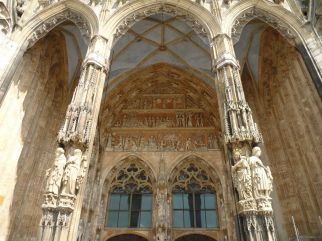 Detail from the entranceway

I had shopping to do! Firstly I had to get some sustenance.

Why do we not get flavours like this back home?? Also it’s 3% cream

However in the 7 years since i last visited German milk has fallen victim to the ‘Make all the flavours coffee’ disease.  Dammit. 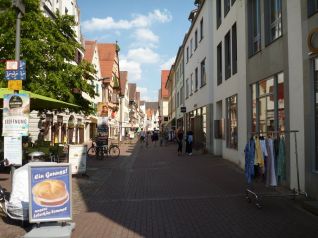 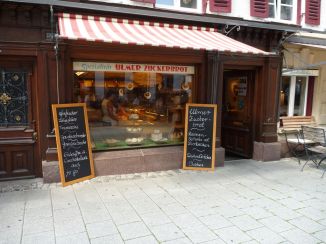 This ‘sugar baker’ is famous in Ulm.  By the time I got there they only had 2 choices left, which was probably a good thing.  I had a piece of cherry crumble cake, which had crumble on the bottom as well as the top.  This is an EXCELLENT technique.

Mug spotted while shopping. It has a compartment for your biscuits!

The Germans know how to do chocolate. This is in a supermarket 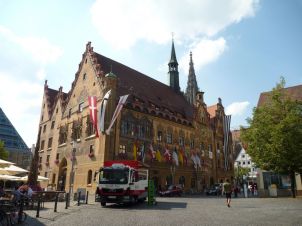 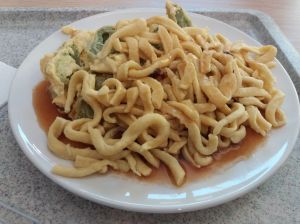 After much bimbling I returned to my hotel in Neu Ulm.  They have a rather rough-hewn 1920s church there. 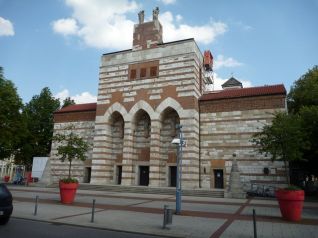 The church of St John in Neu Ulm