When I woke up the weather was a bit schrecklich.  I dropped my bag at the station then took a bus to Hohenschwangau, rather than running.  And just as well because it rained while I was on the bus.  If you are taking the bus to Hohenschwangau catch the 73 or 78 from Fuessen Bahnhof – even though the timetables at the bus stop only have arrival times.  The bus takes about 15 min. 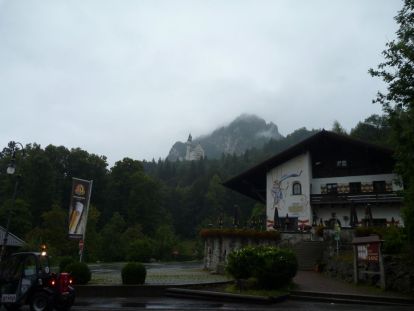 From here take the road to the right to find the ticket centre – it’s about 100m up the road.

Now if you want to visit Neuschwanstein and are not a moron you will reserve your ticket here.  You must do it at least 2 days ahead.  It is well worth it because otherwise you get stuck in a queue for hours.  If you have reserved it you can take the queue to the right (also does tickets for Hohenschwangau castle) and bypass the waiting.  There is no need to pay $90+ for a ‘skip the queue’ tour.

From here you can pay about Eur 2 for a bus to the top, or probably megabucks for a horse and carriage, or you can walk.  It took me about 20 min.  There are 2 tracks and they are about the same.  When I went up (8am) there was no one else about, until I met this chap:

An Alpine Salamander, if I’m correct

As you approach the top you can see the castle!  There are also several places that sell tourist tat and food, but they don’t open until about 9. 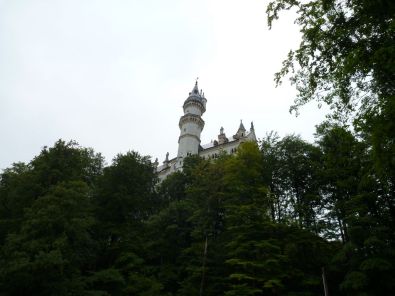 At the top there is a covered waiting area with free wifi, a toilet (free!), and this sign telling you when your tour can enter.  Although you can go inside the castle keep before then, there isn’t really any point because there’s nowhere to sit and not much to see.

View from the waiting area

That’s Hohenschwangau to the left

If you carry on past the castle for 10-15 min you can get to the Marienbrucke (bridge), which gives you a good view of the castle. Note that it’s very high and a bit wobbly, if you don’t like heights. 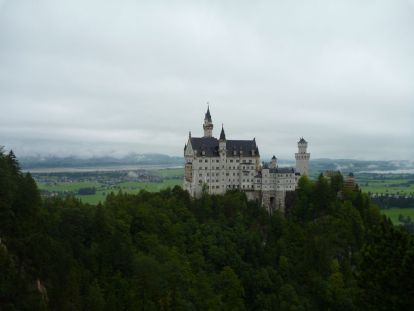 By the time I’d finished at the bridge the hordes were starting to gather.

Coming back from the Marienbrucke

My tour was at 0955.  You scan your ticket in a bar-code reader and go through in groups of about 50.  The castle itself was built late (1886) so it’s actually plaster over brick.

View from the queuing area

You get a tour guide who speaks excellent English, but aren’t allowed to take photos.  You get taken through the throne room, which has gold-painted walls and paintings of various figures, a very ornately carved bedroom, a ‘swan room’ with a giant porcelain swan (take that Crown Lynn!), past the study and in to the music hall (specially prepared for Wagner operas).  It’s all very flash and well worth doing. Incidentally the castle was built with central heating.

Once you go past the first gift shop there is a balcony where you can take photos.

You then go past the castle kitchens, which appear to have their original equipment.  Ludwig II only lived in the castle for 6 months so nothing had a chance to get used that much.

You then go past ANOTHER gift shop and exit.  I came out at about 1030 and the place was hotching! 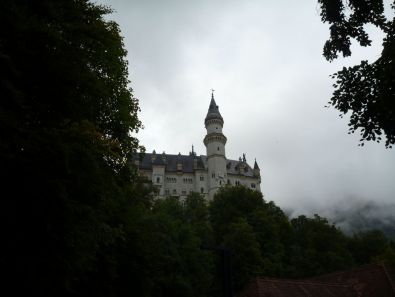 View coming back down the road

I opted to take a path back to the carpark since so many people were on the road.

The path back to the carpark

At the bottom it was MADNESS.

Approximately 5000 children were lined up to take the bus back to town.  I think it was near the end of the school year and the children had just been released into the wild. 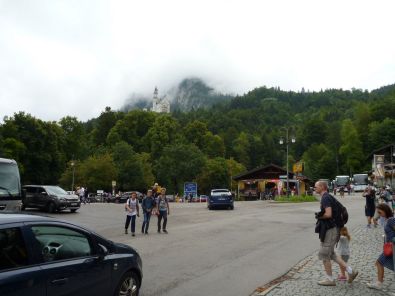 I arrived back in town after being compressed between children and bought some lunch.

The journey to Ulm takes 3 separate trains if you do it on the cheap (Eur 22).  All the connections lined up exactly so I had no waiting. 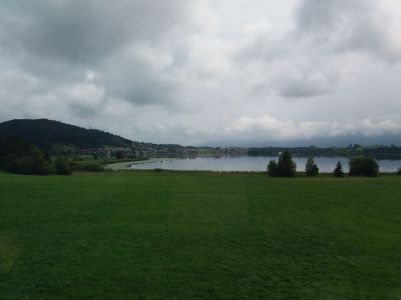 View from the train

I arrived in Ulm mid-afternoon.  It’s one of these towns that was blown up in WW2 so you have ancient buildings and a lot of post-war pebbledash.

A city of contrasts.  That’s the police station on the left.

I check in to my hotel (City Hotel Garni).  It’s a lovely little 20 room hotel.  I had requested a room on an upper floor after my experience being given a room with a view of a carpark once.  I began to regret that decision as I climed 5 flights of stairs with my pack on.

View from my balcony

I asked the hotel woman what was going on.  It turned out it was Schwoeringemontag – the day the mayor promises to go a good job for the year.  Really it’s just an excuse for an ENORMOUS party.  There’s a speech at 11 am, then at 3pm there’s a procession of boats down the Danube.  Everyone comes out to watch.

All the streets have stages for musical acts set up, and places to buy booze – including hard liquor cocktails.  The police and ambulances were widely dispersed about the town. 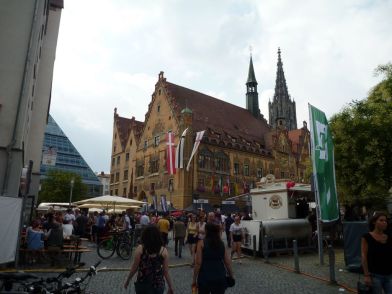 Anyone is allowed down the river so there were many people on random inflatables.  Some floats had decoration and were numbered. 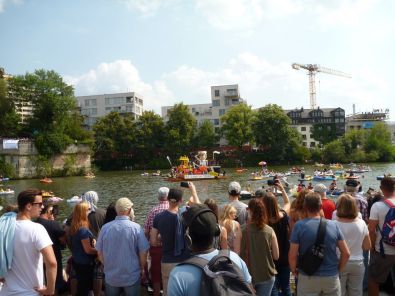 Apprpriate size for a flamingo

This one had a spider and in its web were the logos of various social media websites.  Some sort of philosophical comment about the internet?  How very German.

This one had a cannon!

The people on the river have great fun spashing each other and the spectators.  Note the person on the bank to the right who brought an umbrella

Or you could be like this chap and just float 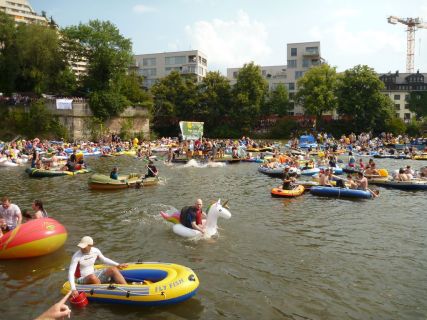 This was a classroom on a barge

It’s all good fun.  There were many families taking part, as well as students.  The only difference was that the students had beer on their boats.

I bought a Grosses Rotes Wurst and an icecream and went back to the hotel.

Lego set up in a toyshop window 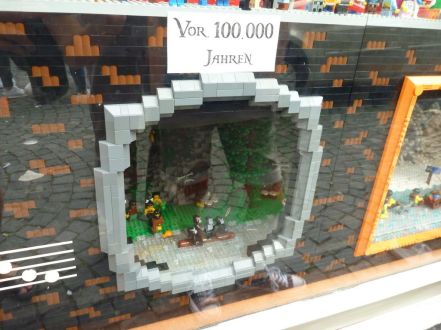 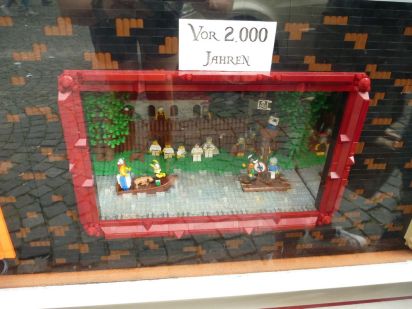