After my previous tramp I thought I’d do another one while in the area.  I had fish and chips at Tapawera, then headed down the Wangapeka River Road.  All the campgrounds around Nelson are full at this time, or charging $40/night for an unpowered tent space.  I decided to stay at the DOC campsite at Siberia Flat.  It’s near the end of the road – about an hour from Tapawera if you’re driving slowly on the unsealed road like I was.  If you have a car with higher ground clearance you could probably do it faster.

While on my last tramp I’d been thinking about how nice a bit of car camping would be. 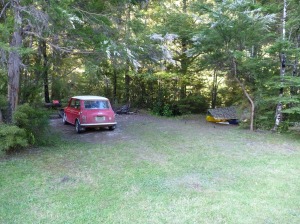 What a lovely set up!

The campsite has no facilities except a longdrop and some picnic tables.  I was the only person there.  It seemed lovely . . .

Look at the river!

. . . until I was descended upon by ONE JILLION SANDFLIES.  A jillion!  I had 80% DEET insect repellent but they just laughed at it.  The only chance of some peace was to walk around or wrap myself entirely in my sleeping bag liner.

The next day I drove the last few km to the road end.  It’s the site of an old gold mining township in the 1870s and revived in the Depression. 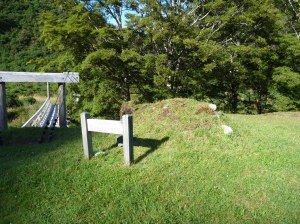 Courthouse Flat. This is the old chimney of the courthouse

View up to where I would be going

There’s a 30 min track that takes you past some old relics. 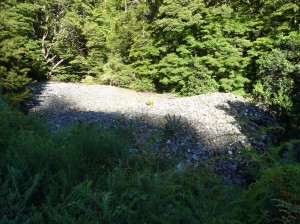 A stamper that was not needed once it arrived, and was dumped because it was too expensive to transport

The track crosses a river

and goes to a stamper battery

It was never economic 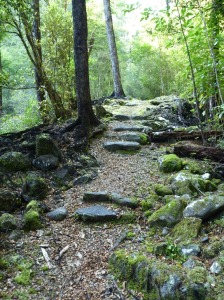 Up this track a bit further is the Blue Creek resurgence.  It’s a pool.

I headed back then took the track up to the main ridge. 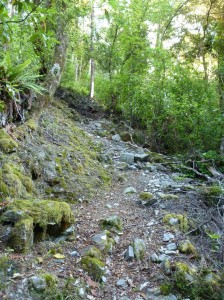 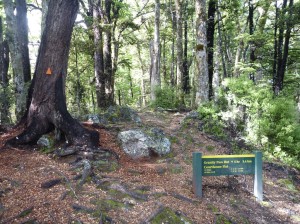 The track then follows this ridge for a gain of 500m. 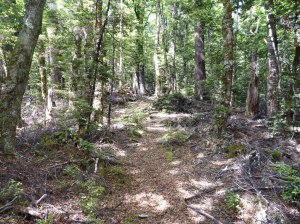 Once again the track is fine – but I found it very hard work. I even had to pause t catch my breath every 10 min or so!

Fortunately there is an excuse to stop and take photos.

After 1.5 km the track breaks out of the bush.

I met two people coming the other way but I must have looked like the giant read sweat monster.
Composure Man – “Hello”
Me – <Wheeze> “Glarbablurgh!”

The vegetation changes to this nifty landscape. 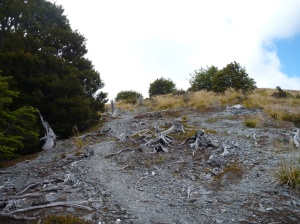 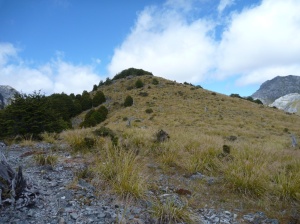 The track heads around the left of this feature

After this there is a section marked as Staircase on the map.  It’s not actually a staircase – just a nickname. 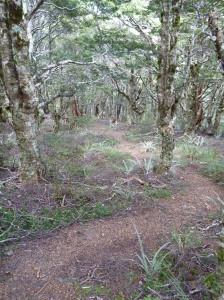 More of a zigzag

Not far after this there is a lookout off to the right of the track – you should see it – it’s a mossy clearing a few metres off the track. 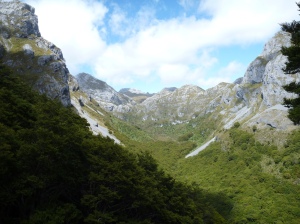 Worth a detour for this view

The track continues down steeply with zig zags and root staircases

Eventually it goes back in to the bush and flattens out a bit.

In the bush here was my main objective – the ‘Old prospector’s hut’.  After 8km what did I get???? 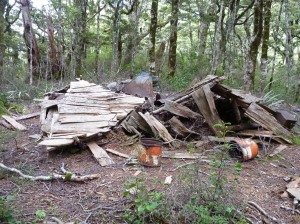 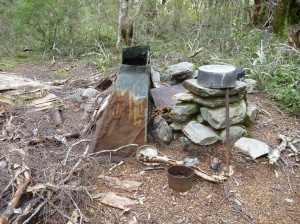 There was a shovel in the chimney. 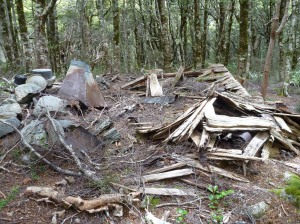 When people say relics like this mean you can reach out and touch history, it’s not to be taken literally. 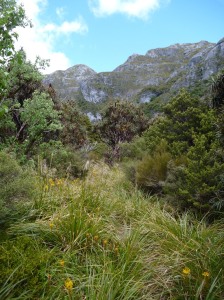 And the track heads up a dry streambed.

Well marked, but you could just follow the streambed the whole way.

The view at the end is amazing.

It took me 4 1/2 hours exactly to reach the hut.  It obviously has quite a lot of traffic with people climbing Mt Own and other surrounding peaks.  The tracks aren’t poled but apparently have cairns.

The hut is new (2009) but does not have a stove – many hut book comments noted how cold it was.  I did not have this problem, but there were a LOT of flies.

The next morning I headed back out on the same track.  For once I could start with dry boots and socks!

Looking down the staircase

Looking up the staircase 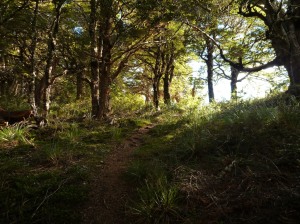 Nearly out of it! 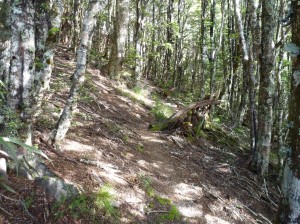 One of the small bush patches at the top

It took me 1 hour 50 min to reach the track junction again.

The other track down the main ridge.

This track is more exposed the whole way down

There are a couple of ascents but eventually it breaks right to a wider track.  This is nearly at the end.

Less than 1km to go

The very last 100m is actually quite muddy – so watch your footing if you don’t want to have to clean your boots!