Westport (population 6000) first struck me because the streets are named alternately between famous British prime ministers and philosophers.  I took Palmerston St, turned up Bentham and checked in  to Bazil’s Hostel on Russel St.  It’s a standard backpacker place – people use the tea towels for wiping the bench, the floors in the ablution areas are all wet, and the walls are thin.  Single room $50.

Westport does however have a surprising number of restaurants.  I went to Porto Bello and had the steak and chips special ($15.50 + $2 for mushroom sauce).  Not bad, but not as good as Reefton?!

The next day I bimbled around the town.

The Municipal Building. Isn’t it fabulous?

The town looks like it is stuck in 1975.  I looked in a rather good junk shop – full of things almost good enough to buy – and The Soap Box, which sells every type of soap you could imagine.  You can also have a bath there for $15.  I thought this was a bit of a stupid service, but it seems to be the thing to do here – the hostel also sold baths for $10/hour.  Must be a mining thing.

After lunch at the Rainbow Tearooms (one of 3 proper tearooms in the town) I drove up to Granity.

I wanted to see the museum but it was shut.  Hmph!  There is nothing else to see here.  Literally.  There is NOTHING! except some houses.

From there I went back to Denniston.  This is worth visiting for the drive alone.  If you are in a campervan it will be awful, but if you have a classic rally car like mine it is 8.1km of pretending you are driving the Rally Monte Carlo.

Lots of tight hairpin bends, ascending turns and a good road surface.  I don’t know why they don’t run a hillclimb here.  But for those of you that may be driving don’t forget you will be sharing with cars coming the other way.

At the top the view is excellent.

Denniston was a major coal mining area from 1882-1967.  To transport the coal a large railway was built on the hill – the Denniston Incline.  Given that the grade is 1:1 in some places the whole thing was a massive engineering feat.  However after the mining stopped the area was abandoned, and degraded quickly with the harsh conditions.

Although people could always access the site few did, until it was developed for tourism a few years ago.  This does not mean it is over-developed – given the isolation and lack of funds it still feels like historical exploring, but with a good number of interpretation panels to tell you about everything.  You also don’t have to put up with people trying to sell you kitschy crap.

There is a decent interpretation centre at Denniston.  If you have been unlucky enough to read Jenny Pattrick’s The Denniston Rose there is also a trail to take you around sites mentioned in the book.  You will need to buy the trail pamphlet from the I-site for $2.  I thought I would read the book in preparation for my visit.  To save time: old-timey wasn’t-life-hard nostalgia meets Mills and Boon with coal.  LOTS of coal.  It’s been tremendously popular here on the Coast.  But so are mullets. 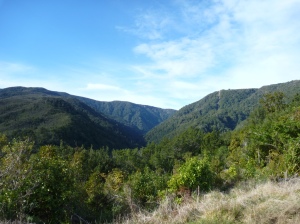 The incline is the light patch on the right

I drove past Denniston to Burnett’s Face.  The sites are clearly marked and there is a lot of other machinery lying around.

Mysterious inscription at the hotel 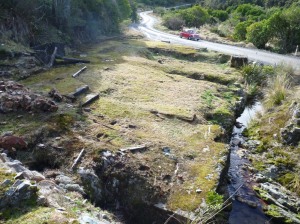 Unfortunately I didn’t have time to walk out to Coalbrookdale – I may come back some other time.

I drove out a bit further, but there isn’t anything here except the danger of mine vehicles.

Burnett’s Face is in the valley

I drove back to Denniston.  There is a museum here, but I didn’t have time to go in – I was booked on the Denniston Experience!  Now that I am working again and am a comparative quadrillionaire to my travelling days I can afford these luxuries!  It’s $85.  I nearly said “It’s not Disneyland, you know!” when paying.

You get a hard hat and jacket, which you need for warmth as it’s so exposed on the hill.  I ended up wearing 2 jackets, overtrousers, warm hat under hard hat, neck gaiter and gloves.

The guides are jovial former miners.
“If anyone farts, you have to own up to it – they set the gas detector off”.
You get taken to the start of the tramway and are allocated a job, then tag in and take the electric tram to the mine entrance.

The main shaft has been enlarged to let the tram fit in. The side shafts are original.

Once inside the group splits in two – tours are limited to 16 people.  My group went around the interactive areas first.  they have been enlarged enough so that you can stand upright in them.  As you go around people do the tasks they were allocated.  There are good sound effects as you go around to simulate the sounds of a mine – creaking wood, rats, and miners’ voices.

The shaft you walk through 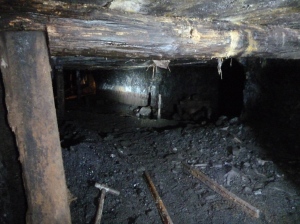 Original size shaft. Note the brown mark on the side marks where the water could reach

Putting in a brace

You are also shown surveying (lining up a tunnel using shadows thrown from stones), shot firing (good special effects here including smoke), hewing (digging the coal) and trucking (moving trolleys of coal).  Then you sit down and have a close look at some artefacts.

A pipe made from dog bone

We also looked at some lamps.  Then we watched a couple of monologue reenactments based on stories from the mine.  I thought these were ok, but a bit . . . trite?

After that we took the tram back out.  It takes two hours.

The real stars are the actual remains. 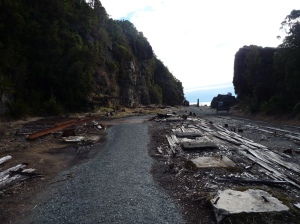 Aerial ropeway tower from the 1950s 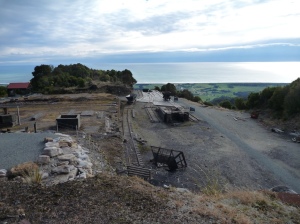 The top of the incline. The hydraulic brake was between the two rail lines

Looking down the incline.  It drops 600m down to the river level.

Looking back across the top of the incline 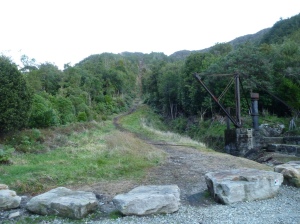 Looking up the incline from the bottom. Due to the shape of the hill the rail is actually in two sections with a flat area in the middle known as Middle Brake.

That night I had some Chinese takeways – you can actually buy steamed buns!  And dumplings!  Not what I expected in Westport.  I then went to the Solid Energy Centre to go to the gym.  How does Westport get such a fancy gym?!  It’s very nice and new and has casual entry for $11.