A Weekend in Greymouth

Unlike the rest of the country Greymouth has had excellent weather this weekend – it really made some community events even better.

One was the annual Art in the Park show at Shantytown.

Shantytown itself is a bit cheesy (speaking as a qualified historian), but a nice enough place to spend an afternoon.  They had a couple of halls filled with art for sale, and displays from the local high schools.  The art for sale was almost universally of scenery, except for one woman selling Swiss rave advertising posters.

I actually found the old cinema posters in the Shantytown display very appealing.

The other interesting display was the operational masonic lodge.

After listening to the RNZAF band and watching the belly dancers I went for a short walk to a lookout. 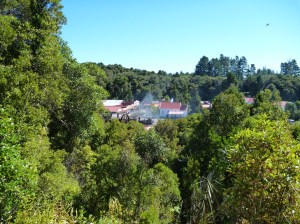 Real steam train with real coal fumes. Not that it's unusual on the Coast.

On Sunday I went to the Omoto racecourse where the gypsies were holding a fair.

They all had housebuses. One even had a wood burning stove inside.

The stalls were the usual things – soap, clothes, wooden toys, secondhand books.  They did have some Dutch fried things served by a very Dutch man, and a bouncy wall covered in velcro that you could throw your child at.  I bought an egg and cheese burger for lunch and took it up the line to  . . .

the Brunner Mine historic site

This is well worth a stop if you are travelling State Highway 7.  It’s near Dobson.  The bridge is a modern restoration of the original, but the ruins are very interesting if you like industrial heritage  . . . or ruins.

These are beehive coking furnaces, but the ruined brickwork reminded me of Roman ruins.

Looking back across the top of the brickworks to the Grey River. It's a nice place for lunch, if nothing else. 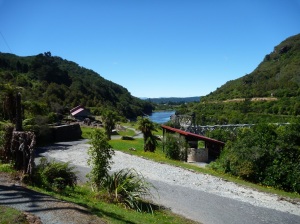 This was also the site of New Zealand's worst mining disaster in 1896, so it is a place of quiet contemplation.

On the drive back I stopped in Dobson.

There isn't much here but there is this curious collection of cars.