I continued my tour of USMC recruit training up at Camp Pendleton, about 45 min from San Diego.  They do their weapons and field training here, as well as the infamous final exercise, the Crucible.

They separate their shooting, so on the known distance range they don’t wear webbing, and have shooting gloves.

40 firing points! But they still have recruits working the butts.

A data book. They have to write fall of shot and sight setting down.

The 'circles'. This is for dry firing exercises.

Shooting Table 2 - more combat-oriented. The targets aren't as realistic as a figure 11!

Next stop was a Crucible stand.  The recruits had some physical challenges and activities. 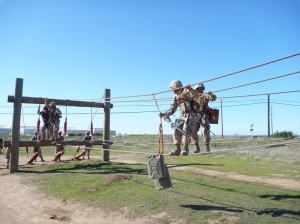 Next stop was a field range.  The recruits were simulating firing from a window, around a corner, and on a roof top, at reactive targets. 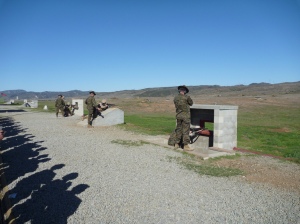 I couldn’t see any targets reacting and asked if they were turned on – it turns out they weren’t hitting them.

Next stop was body sparring.  They had a single 1 minute round.  Strike block move move! 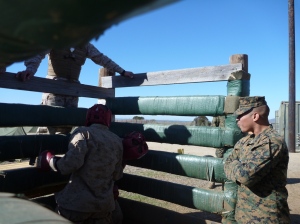 Next stop was the night location.

Recruits don’t carry tarps, and these shelters are left up.  In summer recruits sleep in the open.  There is no digging.  HOW CAN YOU HAVE A BASIC WITHOUT DIGGING?!  They do it all in their next phase, Marine Combat Training, or School of Infantry.

For lunch I went to the mess.  My liason officers said it wasn’t that good, but it was!  $4.25 for a standard meal, and you have the choice of the healthy press (when I went the choices were chicken or goulash) or the fried press – burgers and chips.  There was also a choice of 10 drinks, including Powerade, a salad bar, and a dessert.  The big difference was that you are served – you don’t spoon out your own portion.

Next stop was the 12 stalls – a set of leadership activities.  They have 5 minutes for the assigned leader to do his mission appreciation, then 15 minutes to execute the task.  Failure results in casualty carries.

Don't touch the red or the ground

After I left I had a quick visit to Quantico Arms down the road in Oceanside.  GUCCI!!!!  There are also several good surplus shops in the area.