I caught the bus to Heathrow – less than £3.  However the bus goes to Terminal 1, so I thought I could walk to Terminal 4.  Ha!  It’s about 5km.  But they do have free connecting buses.  The queue at check-in was quite long but somehow I ended up in the Elite line.  Then there was an extremely long line for security screening.  However it moved quite quickly due to profiling the passengers as necessary.  The immigration counter didn’t even look at my passport!

I flew by Continental 757.  They had a reasonable in-flight system – I watched Cars, a new episode of Top Gear and The Hurt Locker.  The food was ok (chicken and pasta for the main meal, then hot ham and cheese sandwiches before landing – I asked for and recieved another one).

When entering the US there are separate queues for citizens and foreigners.  The queue for citizens is non-existent, whereas I had to wait in line for an hour, watching videos on the entrance process and the NFL.  However it did mean my bags were waiting for me at the carousel.  Once again I was not searched at Customs.

There was snow on the ground outside but the weather was wonderfully clear.  I caught a bus to Manhattan for $15 and checked in to the HI Hostel on 104th St.  Subways cost $2.50 for a single ride – you can’t re-use them if you exit a station.  The hostel was very clean but had no cooking facilities.

The next morning I started wandering downtown.  Central Park is a wonderful space for jogging and even has some hills!  But there are roads through it so you can’t run free. 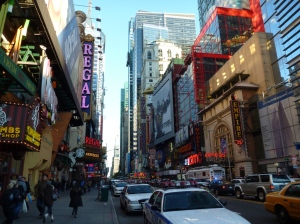 42nd StIt really is all it's cracked up to be.

I went to all the landmark shops – Hershey’s, M&M’s (they clapped when we came in), and Toys R Us.  It’s not as good as Hamley’s – all licensed and franchised action figures and candy. 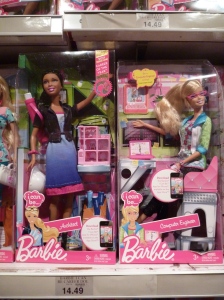 Girls can do anything! But computer engineers always wear glasses.

After that I went to the post office to stand in a queue.  In order to combat terrorism you must post every parcel weighing more than 13 oz in person (because that is how much a bomb weighs, apparently).  Then I collected a letter from General Delivery.  When I asked where the collection point was the woman told me to go around the back, look for the line, and have my benefit card ready.  I found the line – all homeless people, drug users and assorted humanity.  The collection point was in a small room and it reeked – so much that one of the homeless people told those collected that showers were free at the shelter and there was no need to smell funky.

In the afternoon I did boring administration, helped by the free internet at the library.  They search your bags on entry and exit.

It happened to be Halloween that night.  Parents walked out with their children, and the costumes were very good.  The whole atosphere was of good-natured fun.  They went trick-or-treating at local businesses.  The adults went to Times Square and there was a parade around the southern end of Manhattan. 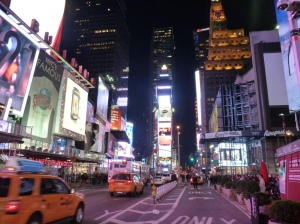 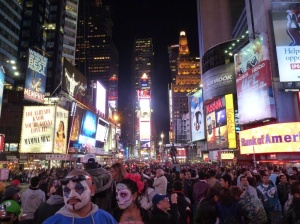 I went to the Granta Halloween party (yes they have such a thing).  By the time I arrived some Japanese American was reading from her new novel. 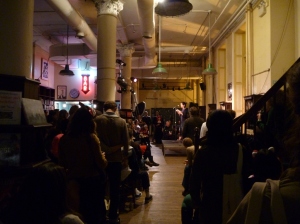 Not really to my taste.  It was all full of hipsters and they really doall have black framed spectacles and drink PBR!  Margaret Atwood and Stephen King were there.  I didn’t talk to either of them because I don’t really like what they write, either. 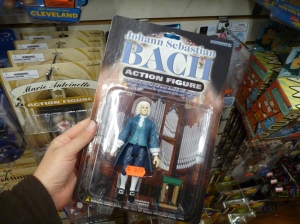 Spotted at a comic shop