I started with another trip to the gym – making the most of my free pass.  I have missed my aerobics.  Here they have a lot more basketball and football training drills in their routines, and they seem less dancy.  Maybe it is just this gym. 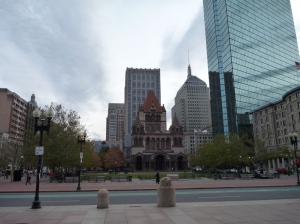 I had lunch at a market – they seem to have a lot of farmers’ markets here.  The food is fresher and fancier but you pay for it. 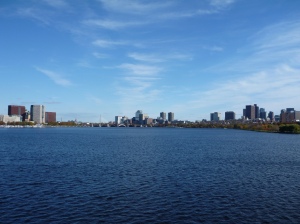 After that I walked over to MIT and had a brief look in the museum (it was $8.50 to go in to the exhibitions so I didn’t). 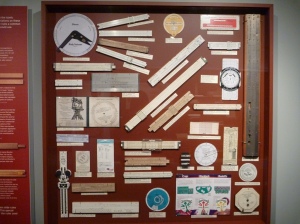 I continued on to Harvard and took a free student-led tour.  It looks exactly as I expected – 19th century brick buildings, lots of trees, and money.  It costs $52 000/year to go there. 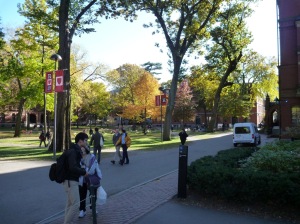 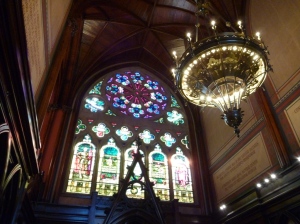 The second largest collection of secular stained glass in the US 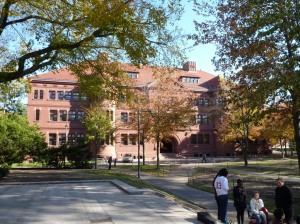 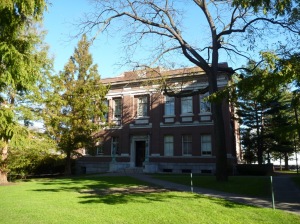 I did like that it wasn’t as touristy as Oxford, but they had a massiveshop.  Harvard-branded thermos?  Coasters?  Umbrella?  Tie?  Undies?  The book shop was awesome – they had a historiography section. 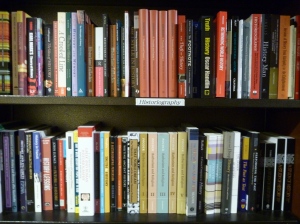 It was nice to remember that there is one area where I can be all fancy and knowledgeable.  Oooh!  Carr!  Munslow!  LaCapra!  White!!  I nearly bought some, but then thought it would probably be cheaper to buy them on Amazon.  The other section that took my eye was about teaching – they had a book called Teach Like a Champion.  Good thing I didn’t buy it because it was all basic stuff – clear expectations, clear instructions, clear board work, interesting materials.

That evening I went to a talk by Tom Brokaw, who has published a new book – The Time of Our Lives. 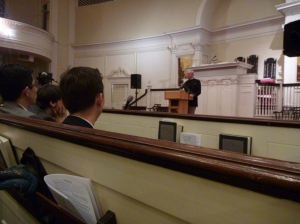 It was held in the Unitarian church (that welcomes people of all gender identities and expressions) and seemed to be full of devotees.  It was quite interesting – he believes in American exceptionalism but thinks that the US is on the wrong path, and the latest generation won’t have the same standard of living unless something changes.  He thinks that the military burden should be shared more evenly across the classes (though he didn’t put it that way) and society needs to be knit together more tightly.  He advocates public-private partnerships for training institutions where people could train and then be sent overseas on aid and soft power missions to improve America’s reputation abroad.  Afterward there were questions.  He was a bit rambly but generally ok, except when someone asked him about the effect of conglomerate ownership on the media – that one he did not answer directly at all.  The last question  was from a Harvard student who spent more of his question talking about himself than anything else.  As I left two people were talking about it.
Man (sarcastically) ‘If he hadn’t said it, would anyone have guessed he was from Harvard?’
Woman ‘Yeah, way to wear a suit, buddy!’