The Last Day in France

I said goodbye to my homestay and walked to the bus stop.  There was a small market set up on the street, surrounded by middle-aged French housewives with baskets, interrogating the stallholders about their produce. 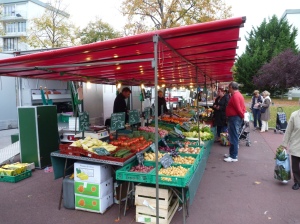 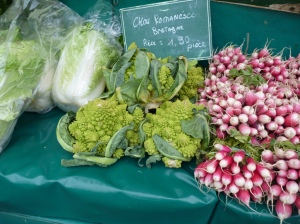 I could have bought a kg of ripe brie for €5, but since I had nowhere to put it decided not to.

I took the bus to Ouistreham.  This is a seaside resort, and since it was out of season there was nothing there.  NOTHING! 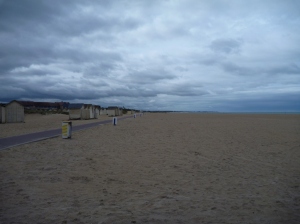 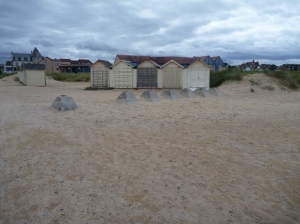 It's actually the eastern end of Sword beach. These were the only remains I could find

The beachfront was a row of closed shops and the few people that were around just made it seem more lonely.  I tried looking for the fitness trail marked on the tourist map.  This does exist but has 2 stations (sit ups and a balance beam), so does not really deliver a full workout.

There’s a large Carrefour on the edge of town.  I decided to buy some specloos spread before I left Europe.  (Just as well, since I haven’t seen any in Britain).

The dairy food section. The French consider it a delicacy

From there I just spent all my time reading on a park bench at the beach, looking in the direction of England.

The ferry left at 11pm.  In the lift some Englishman started talking to me.  I picked him as a bit of a weirdo so managed to throw him off when we boarded.  However when I looked around the ferry (massive, and very flash) he started talking to me again and wouldn’t shut up for two hours.  All “The best BMW to get is the E10 . . . I have 3 motorbikes, but park the best one in the living room . . . Go to Brighton, you can stay in the park, as long as noone sees your tent . . . that was when my second wife left me . . . ”  What an anorak.

There were few people on board so I could have a large section of floor to myself.  It was quite a good sleep – better than under the tarp.  They also had a shower on board, so I could disembark lemony fresh!