A Day in Paris

It turned out that the campsite was only 4km from the Are de Triomphe, so I ran in.  They charge to go under it, so I didn’t.

Paris apparently doesn’t get going until 10.30, but the tourists do.  There were hundreds everywhere, despite it being a crap day in the off-season.

They have a lot of car showrooms on the Champs-Elysees.  You can’t touch the cars but you can have a look at the fanciest each brand has to offer, and buy a €50 keyring.

I started to see what all the fuss was about. Look at how sophisticated those leaves are!

Gucci does it again!

I saw 2 trends for this season – 1940s retro and 1960s black and orange colourblock outfits, especially orange woollen double-breasted coats.  It is in Paris, therefore it is officially in fashion. 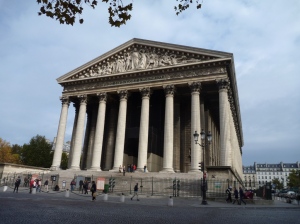 This church is unremarkable except for being a landmark to guide you to Fauchon.

I didn’t go to any galleries because they were expensive and crowded.  Instead I investigated the culinary arts.  Needless to say Fauchon’s doesn’t do sampling. 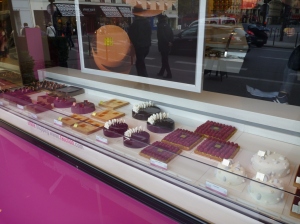 Cheese IS better in France. Considerably so.

This is expensive, even for France.

I bought a caramel as well.  It was rather good.  I also visited Ladurèe, who deal in patisserie and macarons.  All their outlets were crowded with tourists paying €4 per snall macaron.  I went to 2 outlets but was not served in either one, despite being in a queue.  That would be the hobo brown jersey at work.

Paris’s one is bigger.

There was a large crowd of tourists here, and a large queue to go in.  I don’t queue, so I made my way across the square, to find a large display set up by the police.

Can't get away with excess CO in Paris

They also had some motorbikes and chaps with aigulettes.  I thought that was a good enough surprise, then walked a bit further 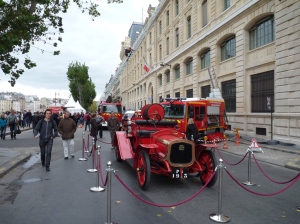 But there was more! 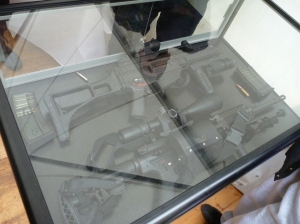 They had their tactical intervention team, and their weapons. But no touching.

This was a pity, since the G36 and HK416 are two weapons I haven’t actually handled.  They did have a mobile camera that we could play with using a remote control. 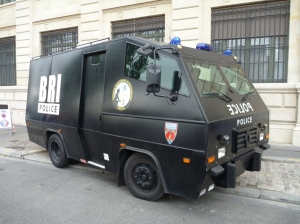 They also had the mounted police and their horses.  What a good show!  But then I discovered a courtyard . . . 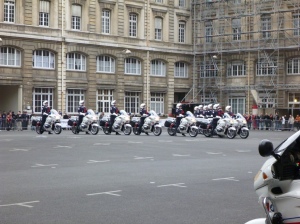 . . . where they were showing demonstrations. Here the motorcyclists take the salute.

I picked up a programme and knew enough French to work out that ‘methods de intervention’ was worth staying for.  The motorcyclists gave quite a good show – unlike other displays set to rock music theirs was to opera and stylish cafe tunes.  But no human pyramid.

There was a bit of this, and crossing over while riding at speed

Next were the physical displays

Rather than standing normally at ease these chaps stood hands akimbo to show off their lats.

After the jungle gym they went on to the parallel bars

This was followed by a comic display using a trampoline and vault horse.  But then came the intervention!

They had 2 dogs showing what they could do – drug detection and attacking criminals.  Apparently they train the dogs to run at the offender with full force, knocking them over.  It seems to work.  They can also make the dog walk between the offender’s legs, jaws just short of the vital spot.

I went back out and found another static display area.  This one had the forensic team and the recruiters.  I needed a new pen (who buys a pen???) and sure enough the recruiters had a pile.  I picked up a brochure too.  One of them said something to me.
“No parler Francy!” I replied, and quickly made a getaway, avec pen.

I had a look at the queue at the Louvre, and the Middle Eastern immigrants peddaling plastic crap and mechanical dog toys.  I have seen these everywhere since Beijing.  NOONE BUYS THEM, OK!  STOP TRYING TO SELL THEM.

The garden was nice. 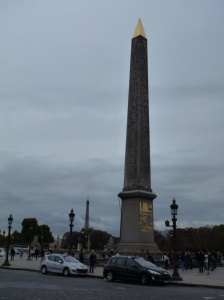 I never actually saw any of these in Egypt.

On the way back I went through a flea market selling expensive antiques.  I saw a painting that looked interesting.  €2800.  I didn’t even like it that much anyway.

Of course I went to the Peugeot showroom. This car is from 1984