Off to the Oktoberfest!  I made an early start.  This was a mistake, as the fest doesn’t really start until 10am.

Aside from the huge beer tents there are also a lot of sideshows – old-fasioned things like shooting galleries and horror houses.  I shot 4/4 shots at the centre bull but won nothing.  Seems the amount you pay determines the prize.

This was my main objective.  Rischart is a bakery chain in Bavaria that sells amazingly delicious  goods.  However they were charging fest prices in their tent so I didn’t buy anything. 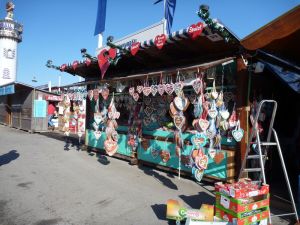 These were common - gingerbread hearts

From here I went to Die Residenz, which I had learned about when I studied German.  I did a speaking assessment about a holiday to Bavaria where I spent one night under a bridge because I had run out of money.  How prescient.

A fountain made out of seashells.

The hall of antiquities - all busts of Roman emperors 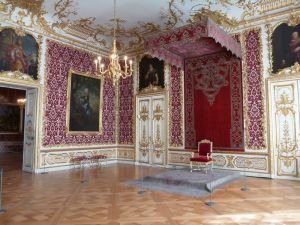 The schmanciness! Considering it took several direct hits in the war I don't think they've done too badly.

The main palace has several hundred rooms, and the tour takes about an hour.  All the rooms are this elaborate.  They also have fancy objects from the royal collections.

What 17th century Europeans thought the Chinese looked like

Bags not doing the dishes

For a small extra charge you can see the crown jewels.  It’s worth it.

These reminded me of 60s plastic drinking cups.

After all that I went to the Englischer Garten.

It's a massive and very nice park

They also have this Chinese tower. Not red enough. Trust me, I know.

I returned to the campsite.  A group from the UK on a ‘Ramshackle Rally’ had arrived.

Appropriate for a Volvo

This was my favourite. I can't think of anything LESS mobile than a pyramid.

And so to bed!

This was when it looked good!