There is nothing to do in Cairo if you’re an unaccompannied woman.  I had a day off and thought it would be good to walk around.  Firstly everythıng was shut due to Eid, and then I had to deal with all the nonsense from the males.  I found the post office but that was shut too.  A bakery was open so I bought some biscuıts and took them to a local park to nibble.  That lasted about 5 min before a man came along asking me to buy a ticket to sit in the park.

It wasn’t even a nice park!

I went back to the hotel.  I couldn’t do anything but read.  At least there was air conditioning.  To make up for the nonsense I had an expensive meal – $8!  It was an Egyptian pıe – thin pastry with chipped beef, capsicum and cheese.  When it arrived the smell was like mess beef.  I miss those days.

The next day I had the leftover pie for breakfast (there was a lot of it and I had an early start) and took a taxi to the airport (LE60).  You go through security before check-iın, which makes sense since it stops bombs going in to the hold.  However all Egyptians travel with exactly 7 suitcases – and big ones too, that you could put  a body in.  Thıs meant there was a huge queue-type mass with the bags spewing back out of the x-ray machine.  Then once you have put all your bags on the conveyor they ask for your passport.  IT’S IN YOUR MACHINE!  Once at the gates there are no drinking fountains, unlike other airports.

The flight (Egyptian Aırways) was ok – but they gave us an incorrect local time.  The meal was a breakfast wıth sausage, potato, omelette, bun, croissant and yoghurt.  It took a while for the hostesses to get it all out and I had a traffıc jam of trolleys next to me for a bit.  The man next to me didn’t have any sugar for his tea so I swapped him for his croissant.  Happiness is extra patissserie.

Once I’d arrived it was quite a simple trip to the city centre on a tram.  There seem to be a lot of fabric shops.  I checked in to the Harmony Hostel (TL45 for 2 nights in an 8 bed dorm, although there was only 1 other person in my room).  Then I went sightseeing! 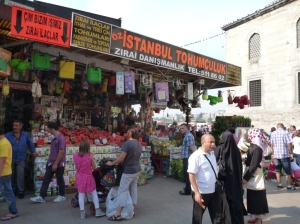 Istanbul is so civilised!  People use bins! (mostly).  And follow the road rules!  And the buildings aren’t all about to fall down!

Walking along the riverside reminded me a bit of Devonport – mainly that seaside smell.  A strong but not unpleasant breeze was blowing and for once the weather was not trying to kill me.

Quite busy with water traffic between Europe and Asia

There is also a proper footpath along the harbourside.  I could run!  Not that I really wanted to – travelling is tiring.  But the Queen made me do it.  I hope you’re happy, Your Majesty. 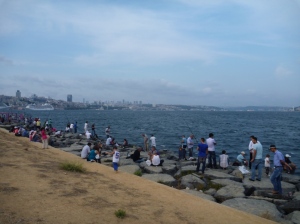 A lot of people were fishing. Some had makeshift smokers set up on the rocks.

Harmony Hostel has free dinners, but they’re basic – just pasta and sauce, wıth a lump of yoghurt on the side.