I arrived at 11.45pm, and decided to sleep at the airport.  It’s somewhat possible.  I managed a few snatches and left on the 5am train.  When I arrived at New Delhi station it was madness – people sleeping on the street, dogs everywhere, rubbish everywhere, and still not yet light.  After orienting myself I caught a rickshaw to Connaught Place.  Or rather, close to Connaught Place – cycle rickshaws aren’t allowed in and a policeman stopped us and told me to “Get off!”

One of the radiating streets.

No shops were open – it was only 6am after all.  I wandered around looking for some internet, but instead had a zillion rickshaw drivers hound me.  Eventually a breakfast place opened. 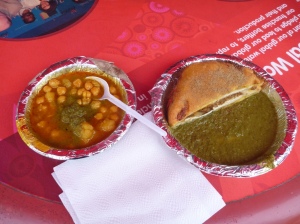 Some kind of sandwich with paneer, and dhal.

I decided to pass the time by reading in the park.  One man told me it was dangerous to sleep, and one man cleaned my ears.  It’s actually worth it – my ears still feel lovely.  I had another go with the tourism offices – only the Delhi Tourism one is real – the others will send you to overpriced places.  I found some internet then went back near the railway station to find a hostel.  After dealing with an unhelpful rickhshaw driver I checked in to the New Guest House for R350/night, single room with fan.

I had an omelette for dinner, then found myself intrigued by a man towing a mobile charcoal oven, baking biscuits.  He weighed my 100g using some hand scales.

They paint the tops with oil - for extra calories?