The bus trip took about 5 1/2 hours from Shanghai.  They show a Chinese film – the same one several times.  You stop once for lunch – the rest stops are very well fitted-out and have toilets (no paper), superette and a restaurant.  Don’t be late back – they will leave without you.

When I arrived in Nanjing there was an industrial-scale traffic jam.  The driver told us to get out in some random place.  What to do?  I took a random car to my hostel.  I stayed at Traveller’s Soul Inn.  It’s a bit out of town, and about 15min walk from the metro station, but it’s nice.  They are in a restored 19th century industrial park – quiet, and picturesque.  They have a coin laundry and all the furniture is wood, so it smells nice, and the air conditioning and hot water work.

I walked around in the afternoon.  There were some boot blacks on the street so I had my sandals polished.  How civilised!  They also offered to clean my ears out, with the same tools they had used on all their previous clients.  Er . . no. 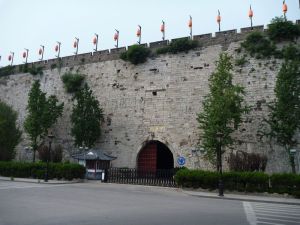 Nanjing has a complete city wall. It's HUGE.

There’s also a large historic district around a Confucian temple.  It was packed with tourists.  There’s not much to see – the temple charges admission.  The imperial academy was slightly interesting – it’s where the mandarins sat their final exams. 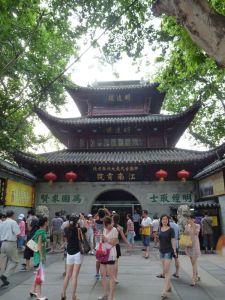 In the area there are stone stelae where mandarins carved their final exam essays.