There are a lot of elephant parks and schools available to visit around Chiang Mai.  But be careful – check the conditions the elephants are trained and kept in.  I chose the Elephant Nature Park because the elephants are free range, do not perform and are trained using positive reinforcement.

We started with feeding straight away. 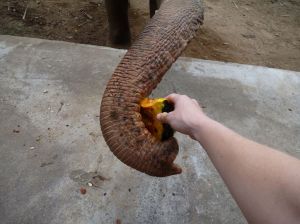 The trunk is surprisingly dextrous but as rough as you'd expect

They eat watermelon, squash and bananas as their ‘snacks’ – the bulk of their food is delivered on trucks.

From here the guide wanted to show us the elephant that had been rescued after standing on a land mine.  The elephant field is 220 acres and also has water buffalo, dogs, and the mahouts.  They live in huts in the field.

The one in the middle. Almost all the elephants have been rescued from logging work

But then one of the herds arrived with A BABY

The other elephant is the grandmother.  We admired this for about 1/2 hr with no fences at all – the elephants were close enough to touch.  When we started to move off the baby (2 years old) started to follow us 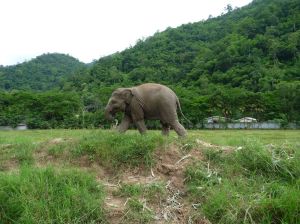 Then he tried climbing in to one of the mahout’s huts, then he grabbed some plastic and started playing with it, prompting some shouting from the mahout and the appearance of grandma and one of the babysitter elephants (they do exist).

After this we had a huge buffet lunch 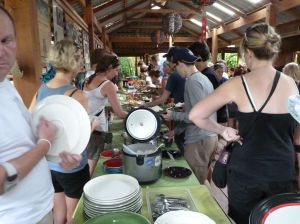 then there was the elephant bathing

It's a hard life for an elephant

After this there was another documentary, more feeding and another round of bathing.  And of course plenty of opportunities for photos

We were driven back to town.

I decided to go out and watch some real Thai boxing.  There are plenty of options, all advertised with flyers.  They say start 9pm but it didn’t get going until 9.20.  The fights all seemed to have the first 2 rounds to size up the opponent – quite slow.  Then the 3rd round was all on, and the first 3 fights had a KO knee to the head.

Then there was the show fight – 6 bozers in the ring at one, and blindfolded!  It was hilarous!  The umpires is just to stop people falling out and keep things interesting – sometimes he hit people in the back of the head, and tripped people up.